From "The Desert Course" 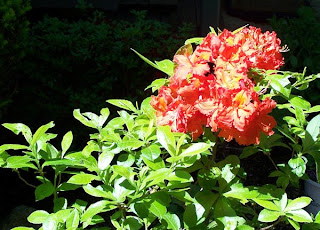 No hawthornes but an orange rhododendum. Lovely, n'est pas?

There is so much cool talent in the blogosphere.


Web Cowgirl's progress through Proust is putting me to shame. http://webcowgirl.livejournal.com/1509874.html


Maybe a few summer afternoons of intensive reading. It's so lovely on our deck overlooking the slough with new flowers planted, the goldfinches visited the thistle seed feeder and the hummingbird making frequent trips to the red feeder full of sugar water. I've also planted lots of cool flowers the hummer will like, and blooms that will attract butterflies. We already have a host of dragonflies and soon (I hope) the bees will come for the oregano and other flowers. Wonder what oregano honey would taste like. Oregano? Hmmm.

Odette, who welcomes comments to this blog.
at 9:18 AM No comments:

To Read or Not To Read

Lately, the Proust blogosphere has been a great void, but today, well, voila!

We have just returned from Montreal where they no doubt read Proust in French, a task I would find extremely daunting, although I get along fine with menu,signage,etc. in French. Montreal is a rather romantic city, not Paris of course, but still exciting.

We took in the fantastic exhibit of Cuban art at the Fine Arts Museum. In the early days, when the Spanish influence was still pronounced in Cuba, all the painters studied in France or Italy, and were obviously influenced by what they found abroad, which they interpreted in strictly Cuban ways.

One can eat well in Montreal and also coming and going at the CIA in Monpelier and at Simon Pearce in Queechee. We had bistrot chicken cooked on the grill last night and it was merveilleuse. 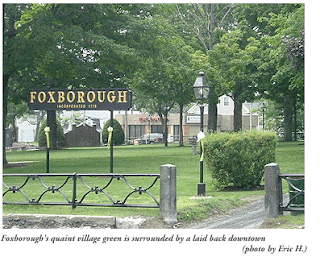 This blog has a fair number of readers in countries outside the U.S., and for them and other far flung worshippers at the shrine of Proust, I'm posting a photo of the Foxborough village green.
Maybe I'll post a photo some time of the very famous Foxborough Stadium where the New England Patriots play football.
Foxborough is an old Massachusetts town that had a foundry where cannon balls were made during the revolutionary war. Then it became famous for making straw hats. The Foxboro company, now mostly known as Invensys, is the largest business in town these days. We have new shopping and the town is always changing.
I frequently blog about the herd of Scottish Highland Cattle that live around the corner from us. We also hear a rooster crow, and a slough and wetlands are behind the house, so Foxborough is still quite rural.
Odette
at 7:58 PM No comments:

I'm trekking to Montreal to see the Cuban art exhibit, something that is hard to find in the states. I mentioned this to a friend who had actually been in Cuba, and she said she didn't remember seeing any art, which is odd, as she is a painter.

So we'll see what we see.

A small mention of Proust in this article:
http://entertainment.timesonline.co.uk/tol/arts_and_entertainment/film/cannes/article3978284.ece

And more yet still:

And of course Web CowGirl always has something interesting to say about Proust. I just have a few more pages of a thriller to read before I return to the kinder, gentler world of Marcel. Come to think of it, it's not kinder at all, but the violence is psychological, not physical.
http://webcowgirl.livejournal.com/

Here is the Book Rabbit Link:

Ye gods, what fun. Our Marcel is a bit sly, and I love him. Now I have to get back to reading him.

Odette, back from Northern Nevada which is very unProustian
at 2:58 PM No comments:

One of These Days


Hawthorne's from Wikipedia: aren't they lovely?

I have been so negligent, so lah-di-dah, so really bad about my Proust reading. It began when I went to Florida end of February and I'm still in a non-reading state. Leaving for Northern Nevada tomorrow, and don't want to carry the heavy volume on the plane. There is also the fact that I'm not that far from the final passages of volume 2, and it's not a book I would want to leave behind. Just can't bring myself to schlepp Proust.

New blog ideas: Schlepping Proust to Nevada; Leaving Proust on the Nightstand; My Nights Without Proust,The Absence of Proust.

Dunno. I need to get back into it. Proust seems to require a soupcon of leisure and quiet-mindedness which I haven't had. Maybe soon.

Damn! And I just know the hawthornes are in bloom somewhere.

Some Proust blogs/articles/etc. of interest today. I wonder if the Hawthorne's are blooming. Always wanted to try to grow them, but I never did.

Some notes on Proust's family life

And a review of the excellent bio, Madame Proust.

Odette who has been ultra-busy this month with this and that.
at 2:55 PM No comments: